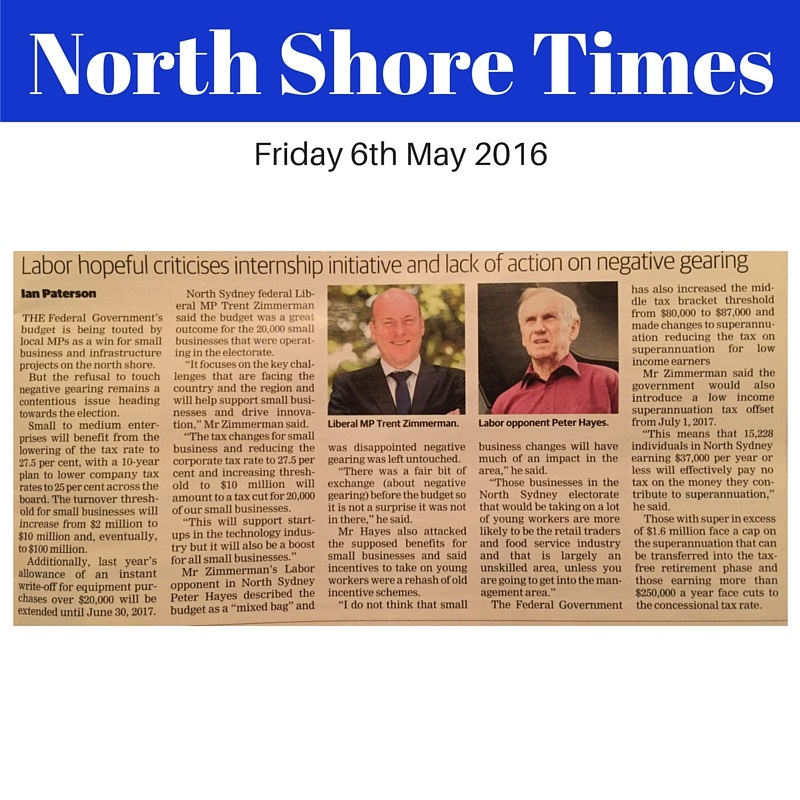 The vast majority of people in the North Sydney Electorate will see no benefit from the Turnbull government’s tax cuts but will be left with higher health costs, according to Peter Hayes, Labor Candidate for North Sydney.

AS a former RAAF Group Captain, I was driven to enter politics in pursuit of fairness for both fellow veterans and the nation in which I had the honour of serving.

In response to Coalition government attempts to undo key systems which make this nation great, Labor has preselected me to lead the charge for the seat of North Sydney.

LABORS POLICY ON NEGATIVE GEARING GETS THE BALANCE RIGHT

The silence by the incumbent Liberal MP for North Sydney Trent Zimmerman following the Liberal’s announcement that there will be no changes to the current negative gearing arrangements shows how out of touch he is with the housing affordability issue in North Sydney.

NO CUTS, NO DELAY TO OUR NDIS

The message from people with disability, their families and carers in North Sydney is very clear: no cuts, no delays to the NDIS.

Mr Turnbull and the Liberals must rule out making any cuts or delays to the rollout of the NDIS.

EVERY SCHOOL, EVERY CHILD IN NORTH SYDNEY BETTER OFF UNDER LABOR’S SCHOOLS PLAN

Every student in every school in North Sydney will get the support they need to reach their full potential with Labor’s Your Child, Our Future plan for Australia’s schools.

A Shorten Government will fully implement and fund the Gonski reforms on-time and in-full – meaning every student in North Sydney will benefit from increased needs-based funding.

Having been endorsed as your local Candidate for the 2016 Federal election, I thought it time to contact all of you - to firstly thank those who have given me their support so far and to tell you about myself.